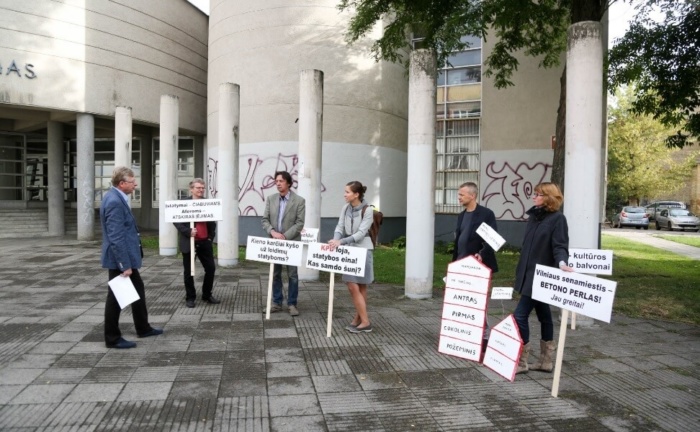 On 9 May, Monday, 4pm, the Board of Judges at the Vilnius District Administrative Court (VDAC) ruled out the decision in the case initiated by Vilnius Communities who filed a lawsuit where it charges the Department of Culture of the Republic of Lithuania with the violation of the Aarhus Convention. The Convention was signed by the UN Economic Commission for Europe and it ensures public right to information, public participation during the environmental planning processes, and the right to go to court if the first two rights are violated.

The communities filed a lawsuit in October 2015 after the Department of Culture refused to provide the information about the Vilnius Old Town Real Estate Heritage Protection (Administration) Plan. (See the comment by the Užupis Community Aministrator and lawyer Rėda Brandišauskienė for more.)

As a former member of the State Commission for Cultural Heritage, and of the Workgroup for analysis of the Non-appliance with the Aarhus Convention by the Republic of Lithuania, which has been established by the Prime Minister, I regret all the cultural heritage that has been lost because the public was taken out of the way. It might have been saved with the help of the communities that care about heritage. – Jūratė Markevičienė.

“The Board of Judges ruled out that the historical centre of Vilnius Old Town is a World Heritage Site thus having a special historic and cultural value. The locals and visitors have a right to enjoy a unique cityscape, therefore the Department of Cultural Heritage was obliged to satisfy the applicants’ request and provide them with all the necessary information as it is stated in the Aarhus Convention. The Board also noted that, according to the Aarhus Convention’s objectives and its explanatory documents, the Convention grants the public with the right to access all the information about any stage of the territorial planning and development. The governmental institutions must provide access to the information about how the developments will affect the living environment—i.e., in this case, the historical centre of Vilnius (Old Town).”

Another important point in the ruling is the legal explanation that according to the Constitution of the Republic of Lithuania, Aarhus Convention is effectively a Lithuanian law, therefore if other national laws contradict the Convention, the latter must be held as superior.

Hopefully, the Court ruling in the case initiated by Vilnius communities will affect the judicial practices so that the people’s right to information is no longer violated.

Locomotive.press asked the communities that initiated the case to comment on the Court ruling:

JŪRATĖ MARKEVIČIENĖ, the representative of the Public Organisation of Žvėrynas Community:

“We are glad that 15 years after the ratification of Aarhus Convention by Seimas and 11 years after the Convention became part of the ES Environmental Law, Lithuania acknowledged that the Convention is applicable to the heritage environments as well. At the same time it is a shame that our institutions had to be forced to acknowledge it only through the court. European heritage and Aarhus Convention specialists were always astounded by the reluctance of Lithuanian institutions of cultural heritage to acknowledge people’s right to their environment whenever the cases of heritage or historic sites are in question. In 2008 the State Commission for Cultural Heritage concluded that Aarhus Convention and other related EU legal acts are not applied in the cases when the cultural heritage and historical sites need to be protected. As a former member of the Commission, and of the Workgroup for analysis of the Non-appliance with the Aarhus Convention by the Republic of Lithuania, I regret all the cultural heritage that has been lost because the public was taken out of the way. It might have been saved with the help of the communities that care about heritage.”

“There are three important things here: application of Aarhus Convention in judicial practice; the acknowledgement of the relevance of Aarhus Convention for the Vilnius Old Town Protection Plan; and the acknowledgement of a violation made by the Department of Cultural Heritage (which had an obligation to prepare a protection plan for the most valuable heritage object of Lithuania). Basically, we won the case.”

This article originally appeared on locomotive.press.