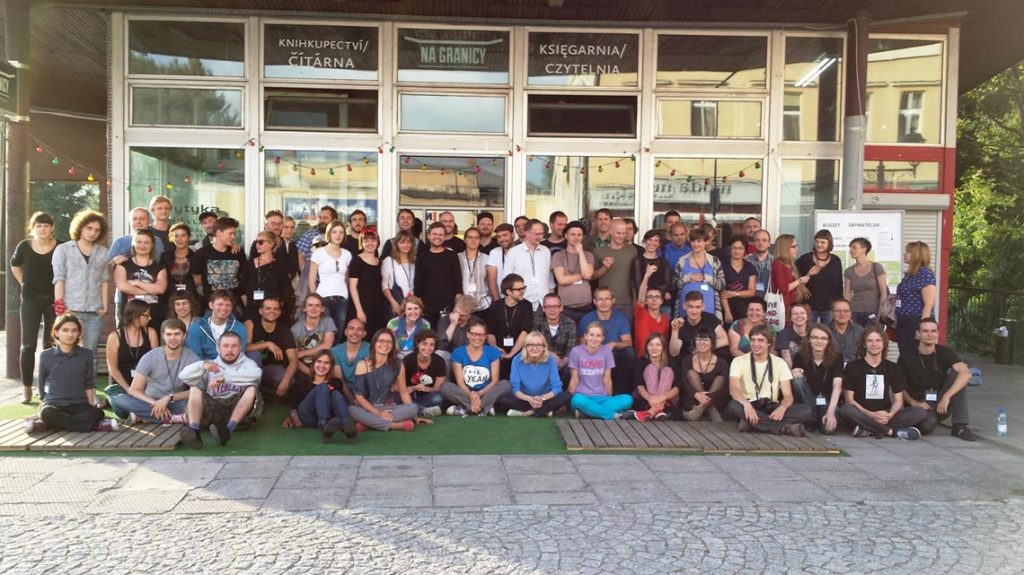 Krytyka Polityczna (Political Critique) is a network of institutions and activists. We operate in many places in Poland and abroad. Our activities take in different areas and take on various forms. For Warsaw residents we are the editorial team on Foksal Street, for those tracking public debate – we are the radio and tv-commentators and Opinion Daily journalists, for book readers – we are a publishing house, for Cieszyn residents – we are a Socio-Cultural Center, for Gdańsk residents – we are animators of socio-cultural life, for Łódź residents – we are the organizers the ‘Revolution of 1905’ anniversary celebrations, in Gniezno they know us as fans of “engaged cinema”, and in Opole – as curators. In the academic world – we host seminars, lectures and conferences organised by our Institute for Advanced Study, in the Polish NGO community – we are one of the largest organisations, in Ukraine – we are “Політична Критика”, and within international networks – we are a little bit of all the aforementioned things: activists, journalists, academics, artists – and we have got used to the fact that it usually takes us a lot of the time to explain how this complex organism called Political Critique works. Between us and for many organisations and groups across Poland and abroad – we are simply friends.

But mere numbers do not, however, say much about our many activities. So what do we actually do?

In the past year you could have met us at book fairs in Warsaw, Cracow, and Wroclaw, the Historical Book Fair, at events such as Literary Sopot, OFF Festival in Katowice, creative fairs #Towary in Łódź, and at Jan Kochanowski’s Name Day in Warsaw. We were also present at the International Book Fair in Frankfurt.

Premieres of our books are accompanied by debates and meetings with authors. If you have missed any of them – you can listen to audio recordings at MixCloud or watch video recordings at YouTube.

Our books have gained the recognition of many readers and critics. We have also received numerous awards:

Polish dailies, weeklies, monthlies, and literary blogs published over 200 reviews of books published by us in 2014.

Opinion Daily, or: we write, translate, and edit

“You don’t like it? Then start your own daily!” And so we did! At our Opinion Daily we comment on the most interesting news from Poland and across the world. We write about culture and economy. Journalists permanently cooperating with us include: Sławomir Sierakowski, Michał Sutowski, Maciej Gdula, Kinga Dunin, Cezary Michalski, Katarzyna Tubylewicz, Oleksij Radynski, and Barbara Nowacka. Apart from texts, we also publish photo essays and video materials.

When many years ago the first Political Critique’s Clubs were established, we made sure to allow them not only to act locally, but also to have their say before a nationwide audience. That is why we organized numerous journalistic workshops and internships at our editorial office. The results are impressive. Our journalistic-editorial team is regularly supported by Dawid Krawczyk from Wrocław, Ula Lukierska from Łódź, Michał Wszołek and Krzysztof Juruś from Cracow, Monika Pastuszko, Martyna Dominiak, Michał Gauza, Marcin Zaród, Elżbieta Rutkowska.

The consequence of our international cooperation is greater presence of our texts abroad: Slawomir Sierakowski’s columns appeared monthly in the “New York Times International” and Czech biweekly “Advojka” along with A2larm.cz website regularly publish articles by Political Critique’s columnists.

Political Critique’s Clubs and Cultural Centers, or: we act locally

Someone once asked what the biggest challenge for Krytyka Polityczna is. We replied: communication. Transport from city to city. Every activity, prepared and carried out in a place to which you have to travel for hours switching trains few times on the way,  a place where you have to spend at least two days, as there is no return connection on the same day, and where there are not as many institutions and not as wide an access to culture as in Warsaw – those are especially the places we love to be active.

In Gdańsk we talked a lot about the environment and organised the Global Education Week and ŚwiEtycznie festival discussing sustainable Christmas, animal rights and growing consumerism.

Łódź is the city of the revolution – every year we organize anniversary celebrations commemorating the Revolution of 1905; furthermore we  organised several events, debates, and workshops, discussing contemporary employment and working conditions, cooperation with the elderly, and city activism.

In Gniezno we organized an open-air exhibition, accompanied by a debate Ghosts of transformation – work; we collaborated with the Offeliada Film Festival and, like every year before, we awarded one of the presented movies with Stanisław Brzozowski Award.

In Wrocław we covered medially the Romanian Roma litigation and co-organised a round table discussion with the participation of non-governmental organisations, representatives of local authorities, and experts.

In Cieszyn we worked with young people, organised concerts of new alternative music and the Residents’ Cultural Forum discussing cultural strategy for the city.

In Opole we organized the exhibition What Cannot Be Seen, presenting socially engaged art with works of contemporary artists such as Joanna Wowrzeczka and Marta Frej.

In Kiev we co-produced another exhibition: Lockout, organised in cooperation with and in the new premises of the Visual Culture Research Center.

We co-organised numerous screenings and readings of the play Golgotha Picnic as a solidarity gesture after the performance had been cancelled by the Malta Festival. These were organised in many cities across Poland (i.e. in Białystok, Bydgoszcz, Gdańsk, Jaworzno, Katowice, Cracow, Lublin, Łódź, Piła, Poznań, Szczecin, Wałbrzych, Warsaw, Wrocław).

We are also very active in Warsaw. All throughout the year we run Critical University, providing a Polish audience (including English-speakers) with numerous debates, seminars, and film screenings. In June we organised a series of debates, events and workshops within the frame of the Jacek Kuroń Festival – presenting critical diagnoses of Polish socio-economical conditions and possible solutions to problems, which Jacek Kuron dealt with his entire life, especially in areas such as education, neighborhood, community, and cooperation. Also in June we implemented a large cultural project in Ursus (a postindustrial district of Warsaw), that included artistic and social events and a parade of old tractors.

In November the Institute organized the 2nd Conference entitled “Culture and Development”. The Institute’s Culture and Development programme is aimed at creating maps of new cultural practices and characterising them in terms of their pro-developmental impact. The programme consisted of the analysis of case studies carried out under the supervision of prof. Jerzy Hausner. During the conference the results of this research were presented, focusing on 6 case studies: Autonomiczne Centrum Społeczne Cicha 4 (Lublin), Fundacja Cohabitat (Łódź), Koło Gospodyń Wiejskich (Lesznowola), Praska Biblioteka Sąsiedzka (Warszawa), Stowarzyszenie De-novo (Dynów), and Teatr Łaźnia Nowa (Kraków/Nowa Huta), along with the results and conclusions from Edwin Bendyk’s Fraktale project. The participants sought to answer to the question: how can new cultural practices focus on empowerment, communities, participation and social sustainability contributing to improving the quality of life, that is – to socio-economic development. The invited panelists included: prof. Monika Kostera, prof. Jerzy Hausner, Edwin Bendyk.

We are part of the Eurozine network, creating a network of institutions and socio-cultural activists working for democracy, initiated by the European Cultural Foundation. We have worked with activists from Italy and Spain within the implementation of the Democracy 4.0 workshops. We have been operating in Ukraine for many years. International meetings are an inspiration for us, forcing us to look at the socio-political situation in Poland and in the region from the outside.

Every summer we organise a general meeting of the Political Critique network. This year, it turned out that this network already includes so many friends from abroad that it must become international. So we invited all the participants to Cieszyn: activists, citizen journalists, cultural animators and social activists from 12 European countries. The meeting was attended by one hundred people from Political Critique who came from Poland, Ukraine, and from friendly organisations in Belarus, Croatia, Russia, Moldova, Czech Republic, Slovakia, Italy, Spain, Germany, and Hungary. During the four-day meeting we discussed the identity of Eastern Europe, the situation in Ukraine and exchanged experiences gained in our daily activist work during a series of workshops. The themes of the workshops included: intolerance of minorities, the fight for the right to the city, gender, culture for democracy, strategies and actions of social and political movements.

We are further developing the cooperation with our friends in Kiev. This autumn, thanks to our combined forces, we opened the Political Critique’s Cultural Centre and Visual Culture Research Centre. In just a few months it became a major center of intellectual life in Kiev. The Centre hosts lectures by renowned visitors from around world and organises discussions and artistic presentations. We were very pleased to hear that the Visual Culture Research Center has been awarded with the Princess Margriet Award. The award ceremony is going to take place in Brussels in March 2015.

“Thinking about an international career” – to quote a well-known Polish song – we launched the English-language version of our website: PoliticalCritique.org. The site consists of translations of Opinion Daily’s articles – prepared for foreign readers – providing comments on the situation in Poland and/or in the region. Additionally, the website includes photo essays, as well as audio- and video-recordings.

We run the Narkopolityka.pl website. Maria Zmarz-Koczanowicz made a film about our Warsaw Cultural Center “Brave New World”. We produced a cycle of films on art called Artists online (Artyści w sieci).

We collaborated with more than 100 various institutions and organisations. We were regularly uploading content about our activities on social networks (58,000 Facebook fans and 54,500 Twitter followers). We are trying to change the world to one in which inequalities decrease and participatory budgets grow!

***
The Stanisław Brzozowski Association was established in 2005. Founded by the creators of the “Krytyka Polityczna” magazine, it organises all activities of the milieu. The patron of the association, Stanisław Brzozowski (1878-1911), was a Polish philosopher, writer, literary and theatre critic and historian of ideas. He preached the need to involve creators in shaping social life. He inspired the biggest Polish intellectuals – Czesław Miłosz, Andrzej Walicki, Maria Janion, Leszek Kołakowski, Adam Michnik – and consequently, the next generations of engaged Polish intelligentsia.

Thank you for supporting our efforts!

If you want to support our activities, please send donations to this bank account: